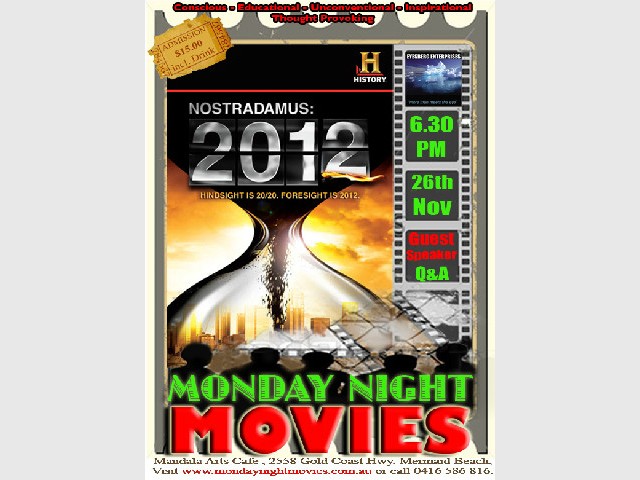 In 2012, a rare and possibly Earth-shattering astrological alignment is due to occur that will precipitate a cataclysmic event. Whatever is in store — a massive cosmic collision, a global environmental disaster, an Armageddon-like religious showdown, or a more subtle transformation — there have been multiple predictions from different times and cultures that December 21, 2012 will mark a major shift in the history of our planet.

NOSTRADAMUS: 2012 takes a detailed investigation of this chilling prophecy.

Predictions made by the world's most infamous prophet have an uncanny accuracy which lends a rather chilling credence to the whole 'it's gonna end in 2012' prediction. But how much of what his man predicted really came true, and how much of it has been made to look true by misinterpretation, coincidence and circumstance is really anyone's guess.

One thing that continually plagues the interesting documentary, however, is that his predictions are pretty much always seen as accurate in hindsight. Had he accurately predicted the rise of Hitler or the September 11, 2001 attacks on the World Trade Center buildings then obviously steps could have been taken to prevent such occurrences from ever actually becoming manifest. So while it's all well and good for the various interviewees, authors and religious experts to go on about how much weight Nostradamus' words carry, if history teaches us anything, it's that we won't really know what he's talking about until after the fact - at which point it will be too late.

From the mystical realms of the Guatemalan jungles to the high-tech corridors of NASA; from the Hopi elders and Mayan shaman to the most respected thinkers of the modern age; from the symbology of the ancient pyramids in Mexico and Egypt to that of the gothic cathedrals and monuments of Europe — the 2012 doomsday warning will be cast in a frighteningly modern context.  December 21, 2012 is bearing down on us with alarming speed – and whether or not we are able to collectively heed the warnings and affect a course to avert disaster may be the defining moment of the modern age.

Questions and answers will follow the movie session with a special GUEST SPEAKER.